Discovery Walk is now part of Dundee’s new waterfront. Situated in the pavement at the edge of Slessor Gardens the ten bronze plaques celebrate the gifts that Dundee has given the world and those inspiring individuals who were behind some of the world’s most groundbreaking discoveries and contributions to science and society. 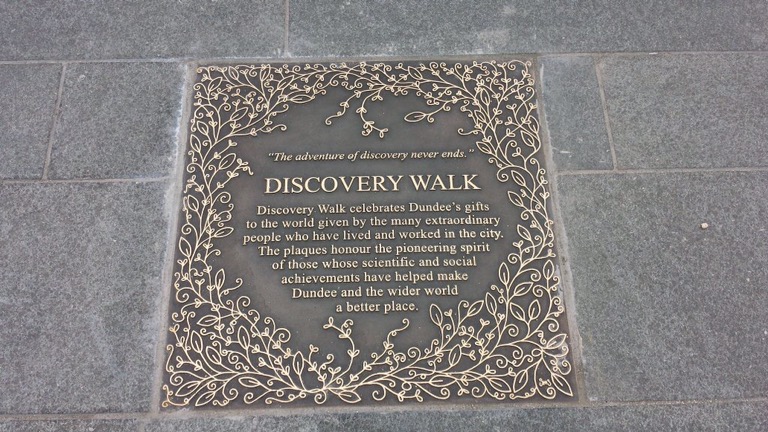 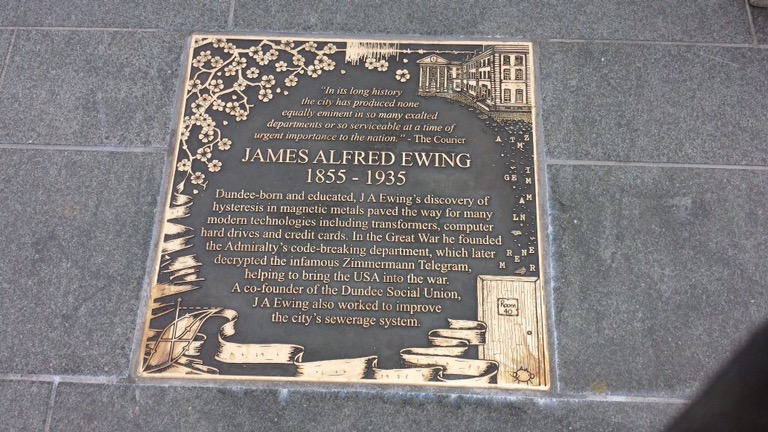 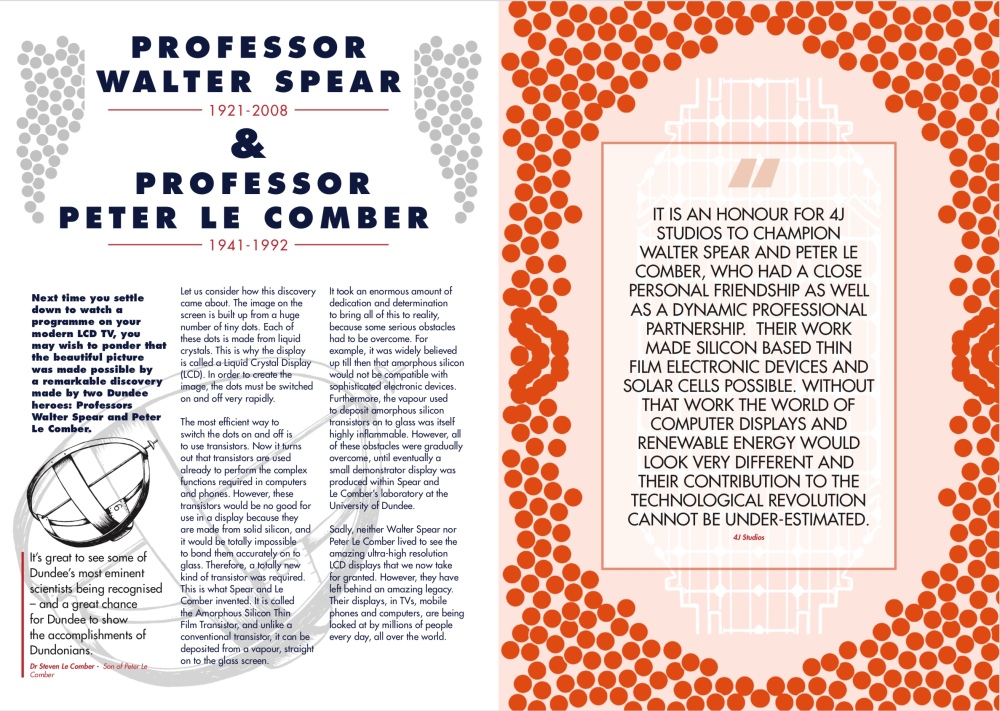 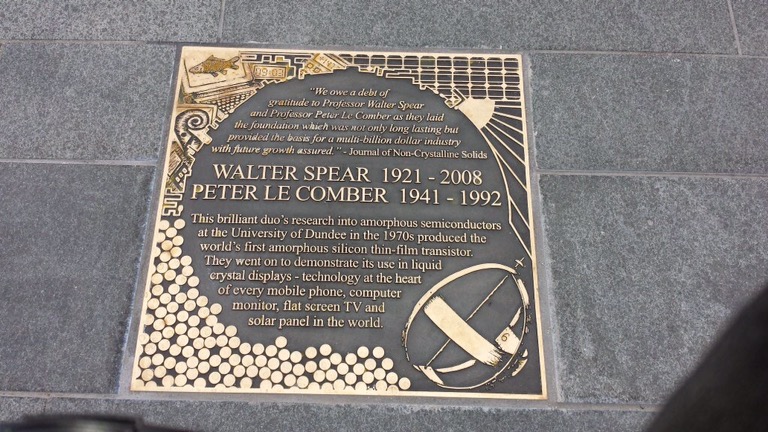 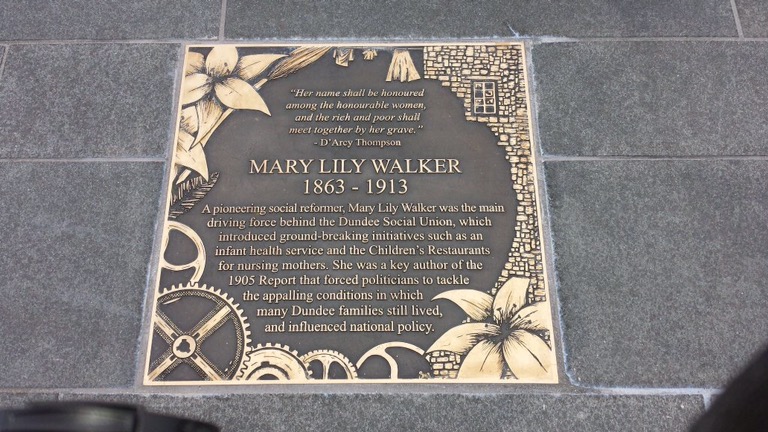 Here is a wonderful film about the story of Discovery Walk by Jaimini Jethwa of Abertay  University: Discovery Walk 2016 It includes interviews with both Kelly Marr and myself and footage from the unveiling ceremony on April 6th.

Foreword by Professor Mike Press, Duncan of Jordanstone College of Art and Design

“Discovery Walk is all about the relatives and colleagues of those celebrated.” It really is! Listen to Kelly Marr talk about the walk, what it symbolises and how she made it all happen on WAVE 102

Working on design proposals for the plaques led me to develop a series of stories depicted by both words and complementary illustrations. The idea was to take people on a short journey to experience the lives and achievements of those notable individuals being featured in the walk.  Through careful research and advice gained from experts, including families in some cases, we developed short descriptive passages for each plaque and the supporting stylised illustrations were each created to carry the story way beyond the written form alone. A picture tells a thousand words, grabs your attention, sparks the imagination and makes you as curious as Alice following the White Rabbit.

The journey has been fascinating for me too – an exciting adventure through Dundee’s history – and I have learnt so much. This project revealed some tricky challenges to be solved along the way, especially in terms of the transformation from ink on paper to evolve as an intricate relief design set in to bronze – but it has been one which has given me so much pleasure to be involved in! And my pleasure continues on when I consider that others will, hopefully, appreciate this information being presented in a creative and respectful way, in celebration of those being honoured and in recognition of their great achievements. I would like to believe that, over the years to come, these impressive bronze plaques of Discovery Walk will inspire others, particularly children, to learn more about the wonderful wealth Dundee holds in its past – and help them look at and understand their present, as well influence their future.

Weekly blog posts telling the stories behind the designing of the bronze plaques:

The Story of the Discovery Walk Title Plaque

Here is some of the story behind the making of the walk….

April 2015: I have been asked to design the bronze plaques for Discovery Walk in Dundee and am beyond delighted to be a part of this exciting and interesting project.

To have my work be part of the Dundee Waterfront is such an incredible honour. I was born in Dundee and came back to live here 15 years ago. I never left as it is a beautiful and inspiring city, which I am proud to live in!

Discovery Walk, will celebrate Dundee’s contribution to science and society with specially commissioned bronze plaques. The plaques will be set into the pavement in the open space area of the newly-named Slessor Gardens at the heart of the Waterfront development. The plaques will give clues to the fascinating stories of individuals whose discoveries and inventions have made many important and exciting contributions to modern life.

“Discovery Walk is the brainchild of Kelly Marr, an Australian who was inspired by the Writers’ Walk around Sydney Harbour.

She said: “During the last 20 years I would hear about some of the great innovations that were made in Dundee, and I always felt that it was a great shame that such achievements were not celebrated publicly.

“Discovery Walk will ensure that this part of the city’s heritage is never forgotten, and it will mean the city can take an enormous pride in the people that are celebrated.” ”                         (Quote taken from Courier article listed below)

Video: Famous Dundonians to be immortalised on waterfront: Discovery Walk Launch on STV

The Courier Reporting on the launch of Discovery Walk

This is a project for the people of the city of Dundee and I would like as many people as possible to feel included in this project too so I am asking everyone their thoughts on what to include in my illustrations on these beautiful bronze plaques. I would love your input!

So please do feel free to leave your ideas in the comments section below or via the WhimSicAL LusH Facebook Page!

The 10 individuals selected for the first phase of Discovery Walk are:

Mary Ann Baxter 1801 – 1884
A profoundly influential supporter of education for women and men, Baxter’s generous financial backing enabled the establishment of University College, Dundee, now the University of Dundee. She was instrumental in the creation of Baxter Park and supported a wide range of church and health initiatives in Dundee.

Geoffrey Dutton 1924 – 2010
As a scientist, his revolutionary work on how the body deals with toxic chemicals helped to save many lives and establish Dundee as a world leader in biomedical sciences. Outside science, his poetry and prose about Scotland’s landscape and people, and about his garden, won him even wider fame.

Sir James Alfred Ewing 1855 – 1935
An exceptional scientist, this son of Dundee pioneered seismology, social reform, codebreaking and the sciences of magnetism and metal fatigue. His work on the magnetic phenomenon of hysteresis paved the way for many modern technologies including electrical transformers, magnetic tape, computer hard drives, and credit cards.

Margaret Fairlie 1891 – 1963
Among the first female graduates in medicine, Fairlie was a distinguished Dundee clinician and inspirational teacher who pioneered the use of radium in the treatment of malignant gynaecological diseases in Scotland. She became the first woman to hold a chair in a Scottish university when appointed Professor of Obstetrics and Gynaecology.

R D Low 1895 – 1980
As a writer, working with artist Dudley Watkins, Low created the iconic Oor Wullie and The Broons cartoon strips that have appeared in every Sunday Post newspaper since 1936. As editor, he launched two of the world’s longest-running comics – The Dandy and The Beano – along with many other famous titles.

James F Riley 1912 – 1985
Working as a radiologist in Dundee Royal Infirmary in the 1950s, Riley discovered that mast cells are responsible for the release of histamine and therefore form a vital part of the immune system, work that contributed greatly to understanding allergic conditions such as asthma and anaphylactic shock.

Walter Spear 1921 – 2008 & Peter Le Comber 1941 – 1992
This brilliant duo’s research into amorphous semiconductors at the University of
Dundee in the 1970s produced the world’s first amorphous silicon thin-film transistor. They went on to demonstrate its use in liquid crystal displays – technology at the heart of every mobile phone, computer monitor, flatscreen TV and solar panel in the world.

D’Arcy Thompson 1860 – 1948
This pioneer of life sciences was one of the great interdisciplinary thinkers of his time. His book ‘On Growth and Form’ (1917) pioneered the science of biomathematics and is hailed as “the greatest work of prose in twentieth century science”. It has influenced scientists, artists, architects and engineers around the world.

Mary Lily Walker 1863 – 1913
A pioneering social reformer, who worked tirelessly to improve conditions for women and children working in Dundee’s slums. Born in the city, she became one of the first students at what is now the University of Dundee, and applied her analytical skills to improve the quality of life of the city’s poorest people.

“Discovery Walk and WhimSicAL LusH are in The Courier again today! Kelly and I were delighted to meet up with Joy and Laura yesterday, the wife and daughter of Peter Le Comber.

I shall be designing his plaque (that he shares with colleague Walter Spear). They developed the technology at University of Dundee that is at the heart of all our flat screen TVs, mobile phones, solar panels and more!

It was a wonderful opportunity for me to get to know the man behind these groundbreaking discoveries better and understand what made him tick outside of his work. This will really help with the design.

We would love to hear from any more relatives too of those commemorated on the walk, so please do get in touch!”

November 2015-Feb 2016: Come along to the Freedom Hair Experience salon to see some of the sketches and illustrations that will be making up the bronze plaques of Dundee’s own Discovery Walk as well as some of Suzanne’s other recent work. 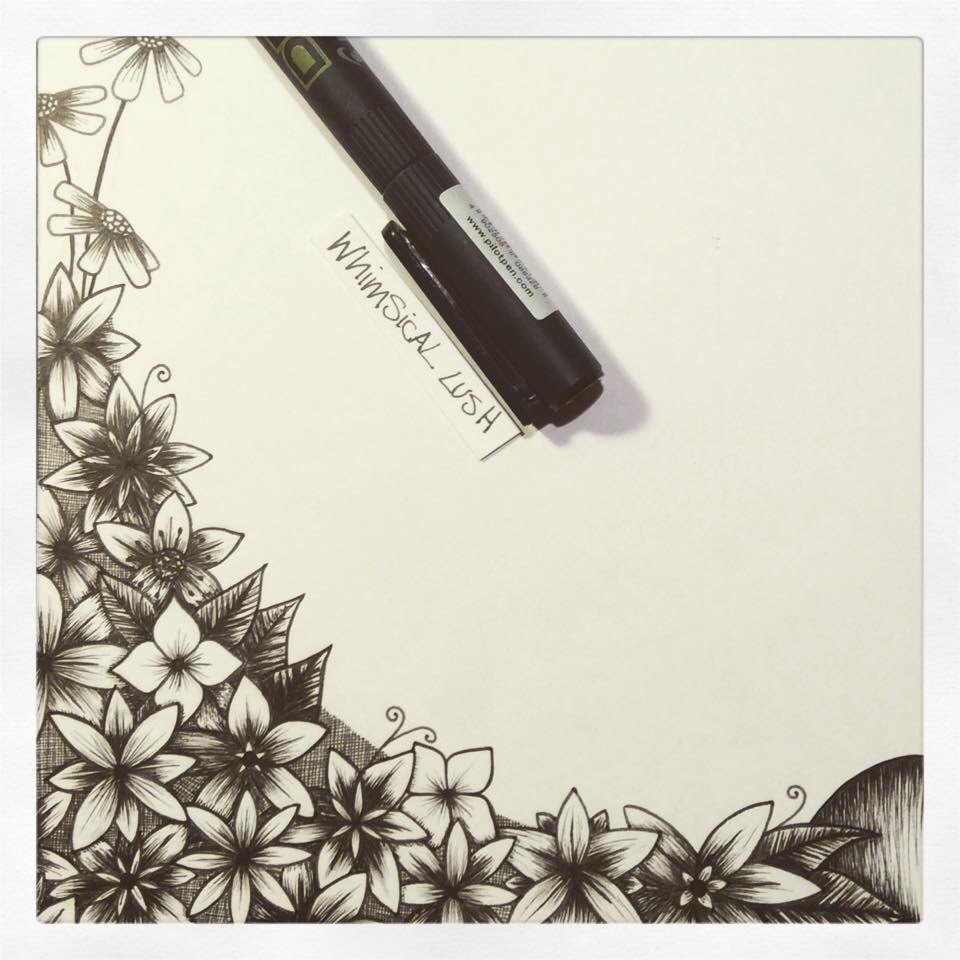 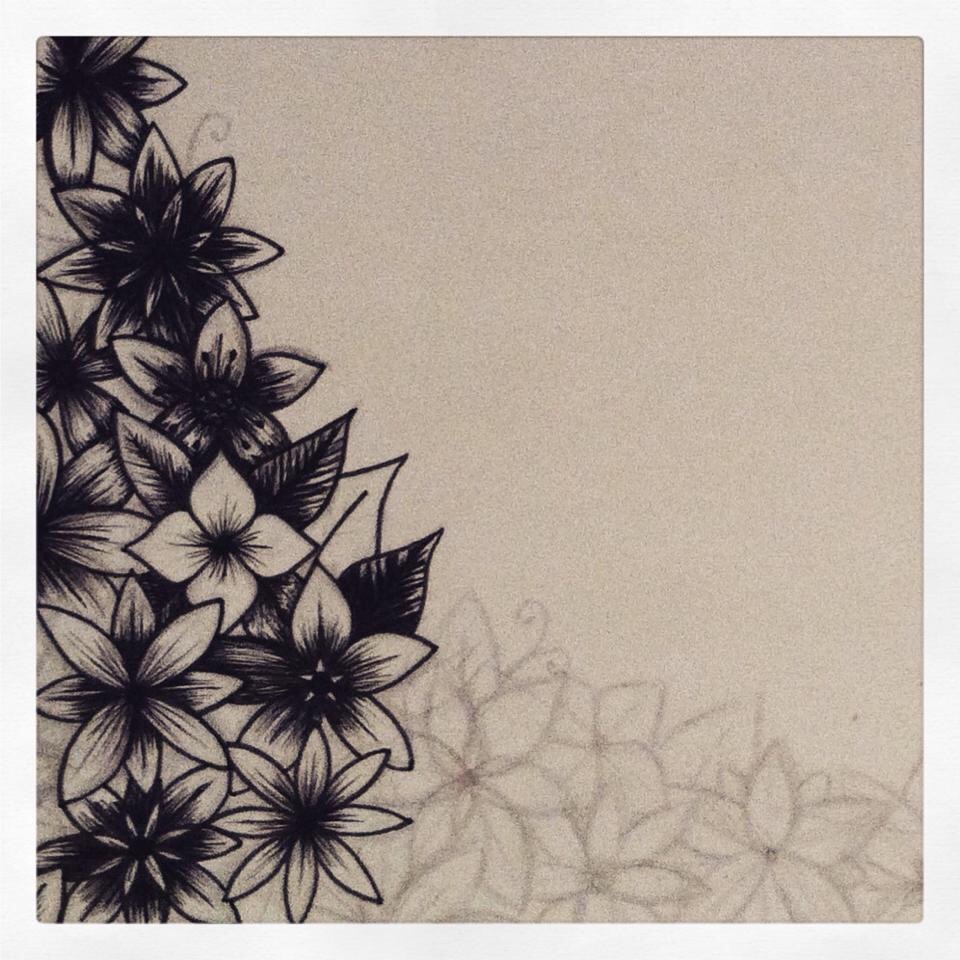 A video of some inky gardening…

Went to Dundee Science Centre for some research on D’Arcy Thompson. Loved the exhibition.

Did you know that D’Arcy Thompson was often spotted walking around Dundee with his parrot? Another fun fact that I unearthed along the way whilst designing the Discovery Walk plaques.

I also found an old photo of him holding a parrot skeleton. Do you think it was his bird? I’d like to think it was him keeping her around even after she had flown off to sleep!

Some more background about the original logo artwork that was used for the launch. I decided that it didn’t work in the end for the walk (for those of you who like to know a little bit more). 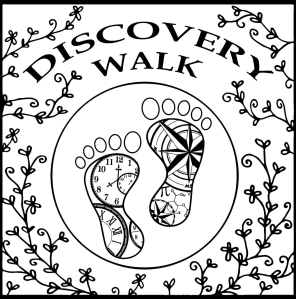 After handrawing the separate elements to the design , including more pieces to the compasses , clock faces representing time, and scientific and mathematical symbols , everything was then scanned and fed into a vector programme to make everything more uniform. This is a process I don’t usually use as I love the fine details of my hand drawings but these drawings were potentially going to be cast in bronze and the lines potentially need to be much more definite for that to be effective.

The vines from the title plaque (representing Dundee’s botanical connections) were never intended to be part of the logo. This came at a later stage from ideas from others when pulling leaflets together for the launch of the walk. So even the artwork has gone on an adventure already, as once it left my drawing board the collaborations with others began. It’s something I hadn’t thought of doing but do soften the harder lines of the footprints.

That really is what this is about though, my illustrations becoming Dundee’s too and I hope that everyone who wants a say is able to be heard. So do get involved in helping me with the creation of these wonderful bronze plaques. I would love to hear from you.

This site uses Akismet to reduce spam. Learn how your comment data is processed.